Maldraxxus's armies must guard the Darklands, serve as a military force of scale. In creepy laboratories, only strength is encouraged - the weak are disposed of by letting them go. Necromancers experiment with the souls of the ambitious and warlike. Only the best of these souls become the immortal soldiers defending the ShadowLands. Here the art of necromancy was born: magicians who subjugated death itself, create powerful immortal armies for themselves from hordes of horrible creatures. 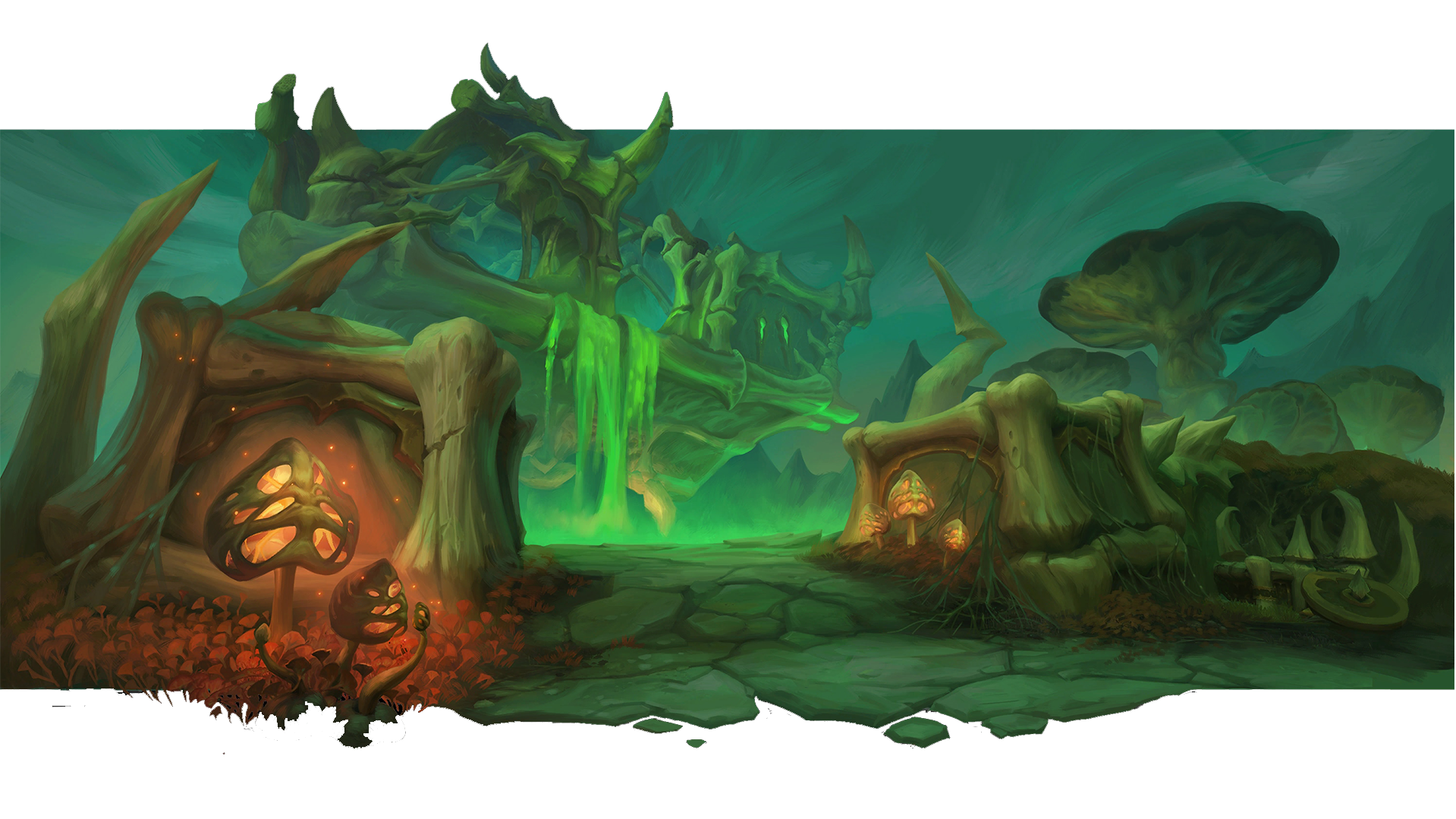 The entrance to this dungeon is located at coordinates 59.2 64.8. It’s available at level 53. In this dungeon you can get mount Slime Serpent.

As this dungeon located in Maldraxxus zone, Necrolord Covenant will help their members with using Fleshcraft on certain slimes with Anima orbs around the dungeon to grant themselves and nearby allies bonuses such as Rapid Infection and Corrosive Gunk.

The exact nature of the plagues and oozes disgorged by the House of Plague's fall may never be deciphered, but the collection of slimes and flesh that became Globgrog will guard this treasure fanatically.

Consume Slime – Globgrog feasts upon any slime which reaches him, healing him for 300% of the slime's remaining health.

Plaguestomp – Globgrog's plagued mass stomps the ground and inflicts Physical damage to all players, knocking them away and applying Debilitating Plague.

Globgrog will [Consume Slime] if a Slimy Morsel reaches him.

Globgrog will [Consume Slime] if a Slimy Morsel reaches him.

The destruction of the House of Plagues and the slime eruptions left in its wake will not stop the presumed genius of Doctor Ickus and his deranged experiments.

When removed, this aura spawns a Erupting Ooze for each stack applied.

Bursting Ooze – The ooze bursts underfoot, inflicting Physical damage to the player who stepped on it.

Erupt – The ooze erupts, inflicting Nature damage to all players.

Burning Strain – Doctor Ickus infects all players, inflicting Nature damage on impact and an additional 879 Nature damage every 1 sec for 10 sec when not engaged in melee combat. This effect stacks.

On death, Pestilence Slimes melt into pools of [Rapid Infection].

Step on Erupting Oozes before they [Erupt].

Domina Venomblade believes the instrument of her revenge for the fall of the House of Eyes rests with Plaguefall. No one, not even her former allies will keep her from gaining the weapon hidden in these ruins.

Webs extend from the Brood Assassin's location, reducing movement speed of players in the area by 30%.

Shadow Ambush – Domina appears behind a marked player, ambushing all players within 10 yds of her target. Players affected by this ambush suffer Shadow damage and are stunned for 3 sec.

[Brood Assassins] cast [Assassinate] until they are revealed.

Beware of nearby allies when targeted by [Shadow Ambush].

[Brood Assassins] cast [Assassinate] until they are revealed.

Beware of your nearby allies when targeted by [Shadow Ambush].

Halberd of the Aranakk - Polearm

Plague Crash – Stradama sinks beneath the slime and causes tentacles to erupt in a pattern, inflicting Nature damage to players caught in the blast.

Touch of Slime – The Malignant Spawn slams the ground, inflicting Nature damage to players within 4 yards of impact. If this attack does not hit any players, it inflicts Nature damage to the party.

Infectious Rain – Margrave Stradama unleashes a torrent of plague every 2 sec for 6 sec coating all players in filth for Nature damage. This disease additionally inflicts Nature damage every 1 sec for 6 sec.This effect stacks.

Plague Rot – Margrave Stradama infects all players, inflicting Nature damage every 1 sec for 30 sec when not engaged in melee combat. This effect stacks.

Defeat Malignant Spawn before they overwhelm the party with [Touch of Slime] . 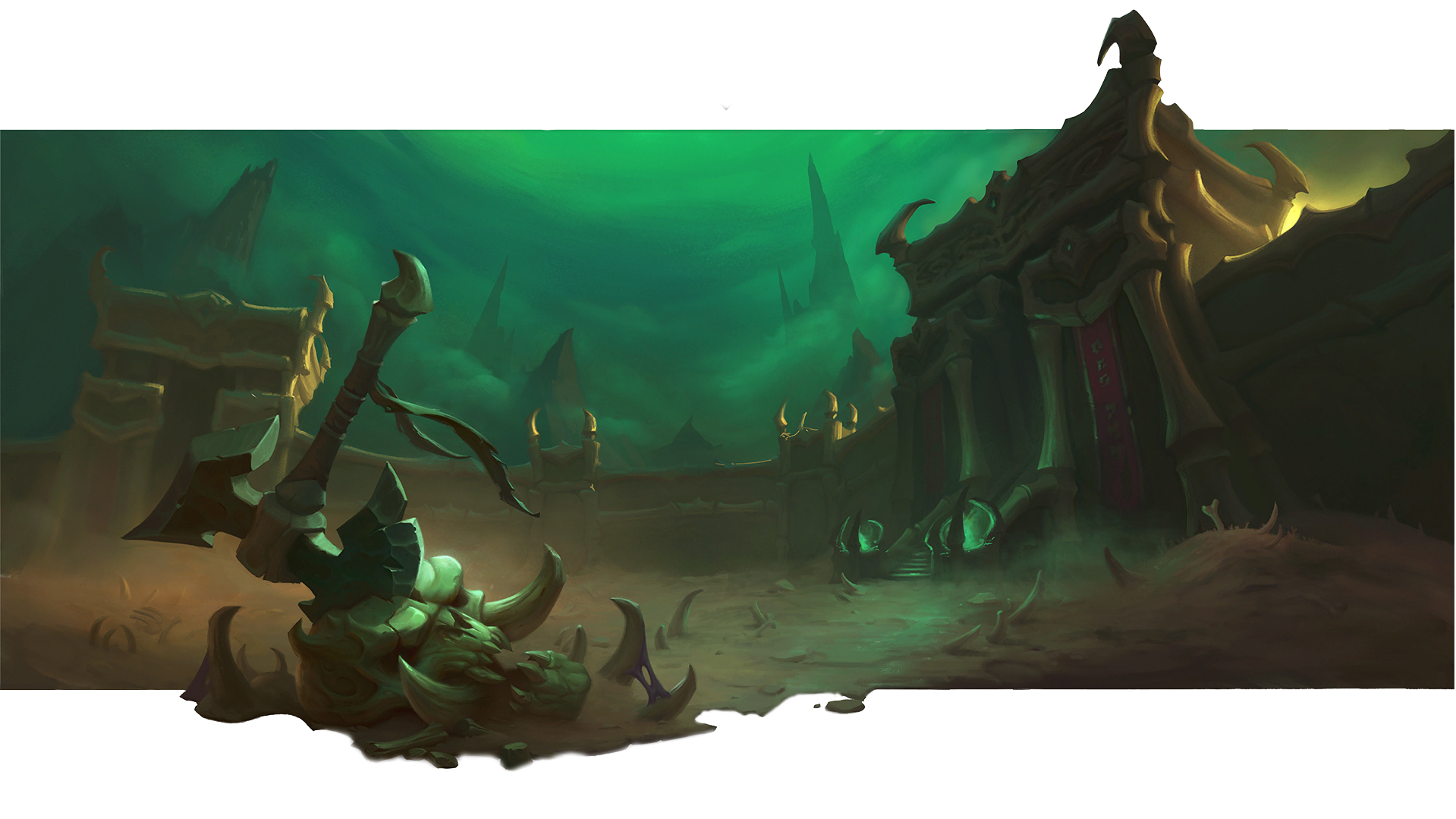 An Affront of Challengers

Champions are not fighting just anyone. First contenders fight among themselves to see which are worthy. Dessia the Decapitator, Paceran the Virulant, and Sathel the Accursed have brought their disparate fighting styles together to knock out other contenders. They will crush any who stand between them and the title match.

Mortal Strike – Dessia strikes her current target for Physical damage and reduces their healing received by 30% for 10 sec.

EnrageEnrage – Dessia gains an absorb shield equal to 30% of her maximum health for 30 sec. While enraged in this way, Dessia moves 15% slower.

Targets players at random with [Plague Bolt] and creates [Noxious Spores] under players' feet. Afflicts all enemies with [Genetic Alteration] at low health.

Noxious Spores – Summons a zone of Noxious Spores at the target location for 10 min. that inflicts Plague damage every 1.5 sec. to all players standing within it.

Alteration – The caster hurls vials of genetic altering plague at all players. While affected, victims drop a pool of Noxious Spores near their current location every 8 sec.

Attacks players at random with [Necromantic Bolt] and becomes [One With Death] at low health. Marks allies with [Spectral Transference] for healing.

Searing Death – Sathel inflicts a random player with Searing Death that inflicts Shadow damage to all players within 3 yards of the victim every 3 sec. for 12 sec.

One With Death – Sathel becomes one with death, absorbing damage equal to 30% of his maximum health and becoming immune to interrupt effects for up to 30 sec.

Periodically attacks players from stealth and retreats once she has either completed her [Opportunity Strikes] ability or it has been interrupted.

When Dessia [Enrages], she will fixate on targets at random.

When Sathel the Accursed uses [One with Death], she is immune to interrupt effects until the shield is broken.

When Dessia [Enrages], she will fixate on targets at random.

As hungry for victory as he is for new parts, Gorechop is ready to show the House of Constructs can build the better warrior. Since arriving in Maldraxxus, he has earned every piece of his body, but he is not above finding something new on a challenger.

Meat Hooks – Meat hooks descend and sweep across the arena. Players that are struck by a meat hook are stunned and suffer Jagged Gash.

Oozing – Oozing Leftovers unravel themselves, losing 5% of their maximum health every 1 sec.

Leaping Thrash – Leaps towards a target, inflicting Physical damage to all enemies within 4 yards.

Coagulating Ooze – Upon death, leaves a pool of Coagulating Ooze that inflicts Plague damage every 1.5 sec to players standing in the area and reduces their movement speed by 30%.

Xav has fought and defeated so many foes that there is a line of contenders battling for their turn. If someone can make their way past them, Xav will relish a worthy challenge.

Blood and Glory – Upon reaching 100 energy, Xav forces players into the dueling pit below. The winner of the duel is granted Glorified while the loser is affected by Bloodied.

Cowardice – Damage dealt reduced by 10% for 20 sec. If neither player is defeated within 45 sec, both players are affected by Cowardice.

Might of Maldraxxus – Xav leaps to the center of the arena inflicting 7324 Physical damage to all players and performs a random combination of attacks.

Crushing Slam – Xav slams the ground, inflicting 11718 Physical damage to players in a line in front of him.

Brutal Combo – A series of brutal melee strikes that inflict increasing Physical damage to their target.

When a player is defeated during [Blood and Glory] both players are returned to Xav's arena.

[Seismic Leap] inflicts substantial damage to the party when [Might of Maldraxxus] is intially cast.

Kul'tharok is a master of the necromantic arts and shows that brute force is not the only way to the top. The path to victory is through his maze of magic portals, and then past his necrotic onslaught.

Draw Soul – The caster draws out the soul of random players. Victims are Soulless for 20 sec.

Soulless – While separated from their soul, the player's body suffers 2344 Shadow damage every 1 sec. and prevents all actions and spellcasting.

Reclaimed Soul – Reclaiming your soul increases your damage dealt by 30% for 30 sec.

While Possessed, the hostile soul forces your body to attack your allies.

Phantasmal Parasite – Kul'tharok attaches a phantasm to random players that inflicts Shadow damage to the target and all players within 3.5 yards every 1 sec. for 10 sec.

Grasping Hands – Kul'tharok summons spectral hands at several nearby locations. Players within 2 yards of the impact suffer 8788 Shadow damage.These hands will bind both players and their souls, immobilizing them for 10 sec. Players immobilized this way take an additional Shadow damage every 1 sec. for 10 sec.

Spectral Reach – While Kul'tharok's primary target is not in melee range she unleashes necrotic energy at them, inflicting Shadow damage and causes the victim to suffer an additional Shadow damage every 3 sec for 12 sec.

Chill of the Beyond – Kul'tharok's presence chills players to the bone, inflicting Shadow damage every 3 sec.

[Draw Soul] will always make your move towards Kul'tharok.

[Draw Soul] prevents all actions and spell casting until your soul is recaptured.

Kul'tharok only uses her [Spectral Reach] when her primary target isn't in melee range.

[Draw Soul] will always make your move towards Kul'tharok.

Endless battles and endless victories, Mordretha has bested every opponent who has challenged her. In life she was a master of dark magic and her time in Maldraxxus has only expanded that knowledge.

Dark Devastation - Mordretha channels a beam of Anima, inflicting Shadow damage every 0.5 sec and pushing back players within it.

Manifest Death - Mordretha haunts all players, inflicting Shadow damage every 2 sec for 6 sec. When this effect expires, it inflicts to the player and allies within 6 yards.

Barricade of the Endless Empire - Shield