Unguent Caress is a one-hand weapon that can be dropped by Ra-den the Despoiled in Ny’alotha, the Waking City raid. Item level is 460, so ilvl of your character must be 445+. With this weapon, you also get an exclusive corruption effect Lash of the Void, with corruption 25+. Applying it, you have a chance to lash and snaring your target with living tentacle dealing shadow damage with 122% of your attack power, and to slow it on 30% for 6 sec. Here you can see strategy guide for Ra-den, the fight with him consists of two phases. First phase presents as two repeating stages. Phase two begins, when health of the boss drops to 40%.

During this phase the boss alternates between Vita Empowered and Void Empowered. On the both sides of the boss there are portals, from which will appear two orbs in a few seconds after beginning the fight and every 60 seconds during the phase. These are Essence of Vita and Essence of Void, they move towards Ra-den and you cannot stop them. One of them must be destroyed each time they appear, but second orb becomes invulnerable to any damage. It means the boss gets one of these buffs anyway. When an orb touches the boss, he gets the power of corresponding orb during 40 seconds. Ra-den can get power from both orb, but you need to avoid this situation. If he gets the same power twice, he casts Overwhelming Rage, that can kill all raid. So you should to destroy the orbs by turns. You can get Instability Exposure from Unstable Vita or Unstable Void, it increases damage by 300% for 30 seconds. Nullifying Strike is used by Ra-den every time when he reaches 100 energy independently of active buff. Tanks should taunt off of one another after each Nullifying Strike. All allies can stay at one place during the whole phase one.

This phase starts when Ra-den’s health drop until 40%. Decaying Strike will be instead of Nullifying Strike. Damage from the boss is buffed by Lingering Energies, together with Ruin it can kill raid, so your main goal here is to kill the boss as fast as possible. You need to stay together with your allies in one place and to run away only in case of Void Eruption. Also tanks need to alternate of one another after each Decaying Strike, health of tank must be low before this Strike to minimize the damage from Decaying Wound. When raid is afflicted by Charged Bonds, players need to move away from one another and to break chains as fast as possible. You should to apply Heroism, Bloodlust and Time Warp together with cooldowns on the last minute of the fight. 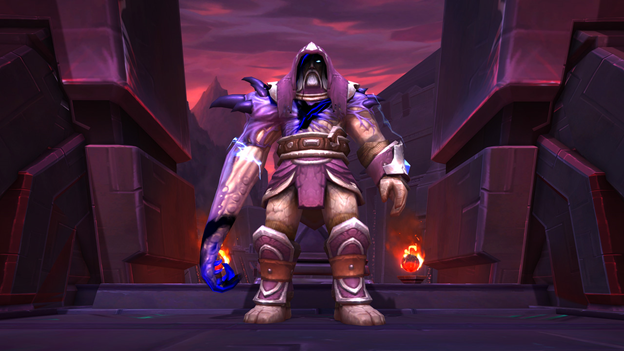 Unguent Caress has a very low chance to drop, only 1,15% according to wowhead.com. A player has a chance to get this weapon if his/her character will be one of these classes: shaman, monk, demon hunter or rogue.

We can help you to bring to life your wish to have such desired weapon. Special item offer for Unguent Caress gives you 100% chance to get it.