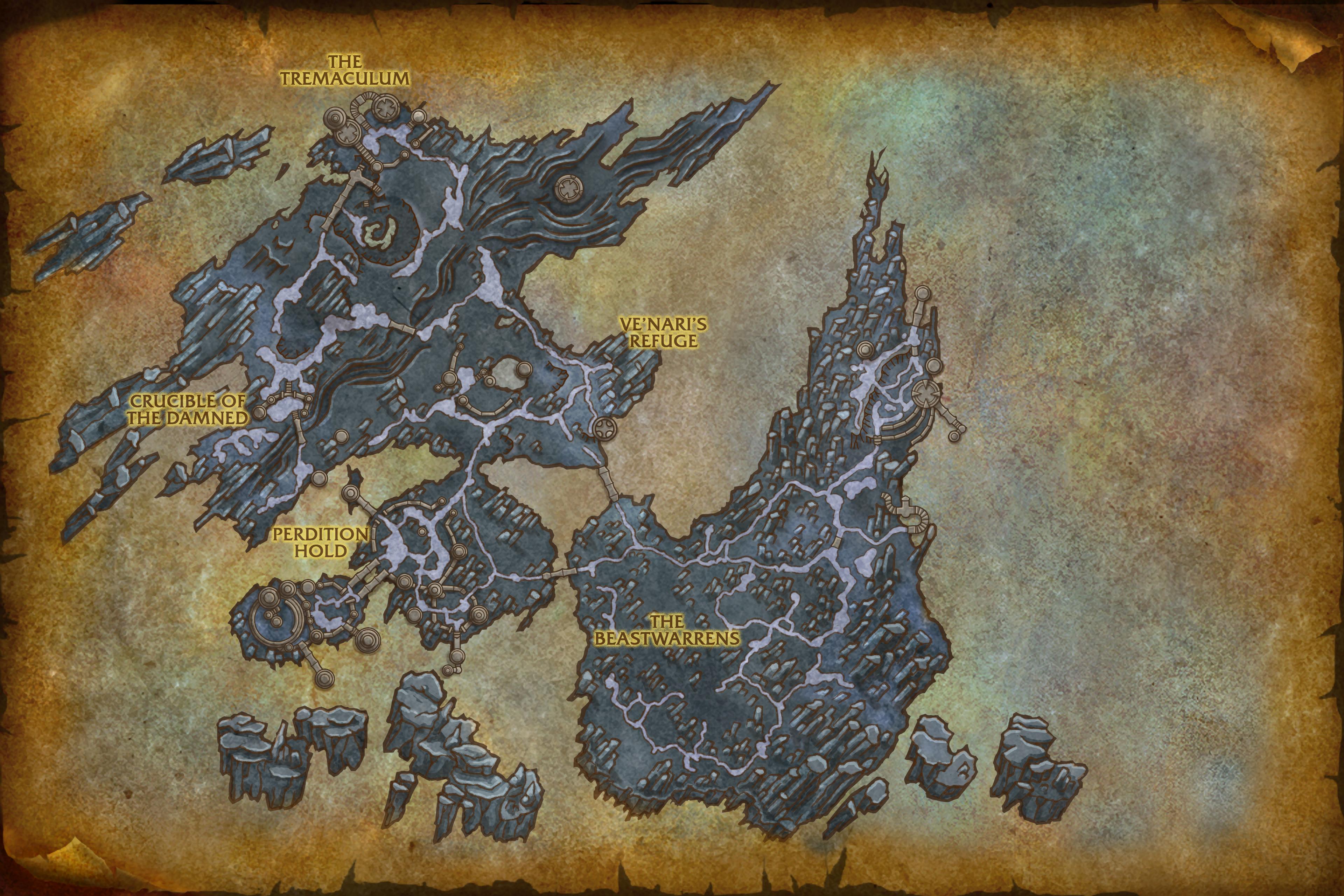 The Maw, a miserable place where the souls of the world's greatest villains are tortured for all eternity. At least that's how it's supposed to work. The Arbiter responsible for determining where each soul should spend their afterlife has gone dormant and everyone is being sent to The Maw instead.

After the opportunity to recruit souls for the Сovenant appears, Bolvar Fordragon will have the quest “Into Torgast” in the Oribos tower, which is a kind of training and, to a certain extent, a continuation of the plot.

Main things that you can do in the Maw is - Farm a new currency, Stygia, for the broker Ve'nari (buy a lot of useful staff), and run Torghast, Tower of the Damned (you can get a lot of items and recipes). 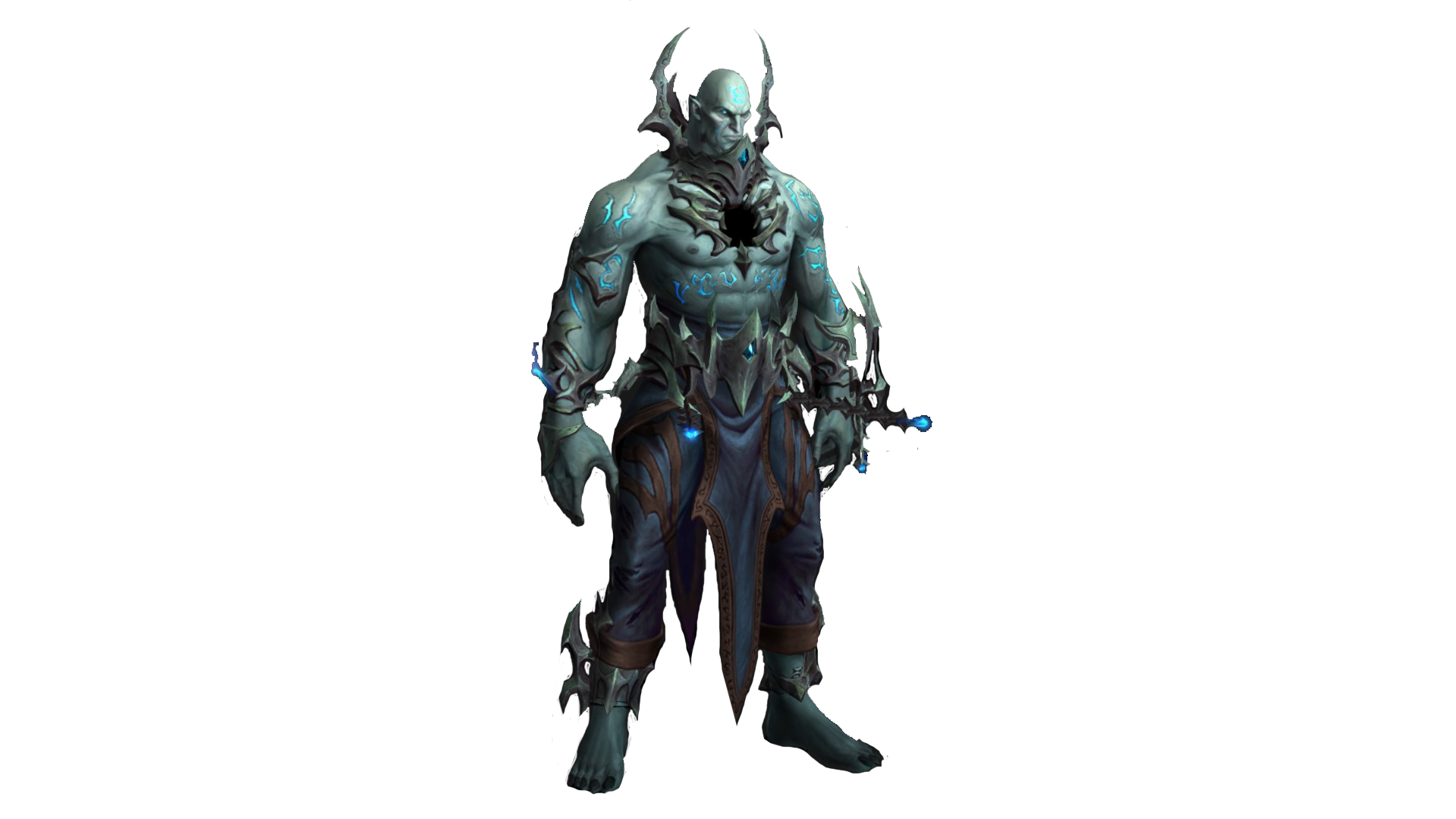 The Jailer, a new villain who rules the Maw and seeks to spread his dark influence over all the realms of the dead. As you explore the Maw, you will learn more about the Jailer and gain the strength you need to fight him. But naturally he will not sit back, but will try to eliminate you in possible ways. Your threat level will rise, leading to nasty effects like assassin attacks or high damage siege fire.

Here's what to expect with this debuff, Eye of the Jailer:

Tier 1 - Aggressive mobs in the form of the Eye will begin to pay attention to the character, until that moment they were neutral.

Tier 2 - Periodically, a projectile is dropped towards the character (displayed as AOE). It deals small damage and sets up five pillars that bind the character and slow down the movement speed. You can get rid of the pillars only by using each one.

Tier 3 - An ordinary Assassin of the Jailer will start hunting for the character. At a certain moment in the center of the screen you will see an inscription in the spirit of “The hunt has begun for you”, and a red-eye icon will appear above the character. After that, attacking any enemy, you will also summon an assassin.

Tier 4 - The elite Assassin of the Jailer will start hunting for the character. A little more difficult than usual, but still refers to ordinary mobs (at first I thought that he would be at least an elite or an officer).

Tier 5 - Being in the Maw, the character loses a small part of HP every second. It is impossible to get rid of this effect or slow it down, you will have to wait the next day before the Eye is reset.

If the powers of the Jailer overpower you, you will lose some of your hard-earned Stygia, a resources that you can spend with the mysterious broker Ve'nari, In some unknown way, she managed to survive in this eerie place for a very long time.

You can exchange Stygia for some powerful abilities and positive effects, or either change to transmog sets or pets.

Creatures of the Maw

It will not be enough for you to gaze from the Jailer, as the Maw is full of creatures that will not allow you to rest in peace and you will need to develop certain tactics and tricks to deal with them or bypass them.

Faithful to the Maw

Faithful to the Maw are elite warbands of the Jailer's warriors. They are not only the defenders of the kingdom, but also the main punishing force of all dissent. They are classified into two types:

Faithful to the Maw avenger

It is these warriors soaring in the sky that are responsible for the integrity of the boundaries of the kingdom. Anyone who crosses them without an invitation will face a severe punishment in the form of sharp spears sticking out of the intruders.

Dark Sorcerer Faithful to the Maw

Possessing knowledge and proficiency in the field of dark magic, these powerful sorcerers punish with charges of dark energy for any dissent that goes against the will and wishes of the Jailer.

There pretty much beasts and spirits:

These mindless, but incredibly strong and cruel creatures, dressed in iron armor, destroy everything around and destroy everyone who dares to stand in their way.

Beings born of the Womb itself. The energy of captive souls, for many centuries, is transformed into the evil creatures of the Maw. From once simply evil souls, under the influence of lower energies, they become incredibly strong and evil entities. These creatures inhabit the darkest and most hidden corners of the kingdom.

They are creepy monsters, whose appearance and actions are quite consistent with this hellish kingdom. These hellhounds rip the bodies of their victims to shreds, feeding on their despair and enjoying the screams of agony, and then they devour the remains of the tortured bodies and souls of the unfortunate.

These creatures are like the eyes of the Jailer. They watch everything that happens in the Maw. If a stranger enters, or there are some unplanned changes in the kingdom, the Jailer immediately finds out about this and through these creatures severely punishes the guilty ones.

Another offspring of the Maw, which has no purpose and no ability to think reasonably. Under the influence of dark energy, the hatred of all souls trapped in confinement is reborn into living clots of incinerating hatred. These creatures wandering aimlessly through the realm unleash their rage, blazing with hatred, on the souls they meet on their way. 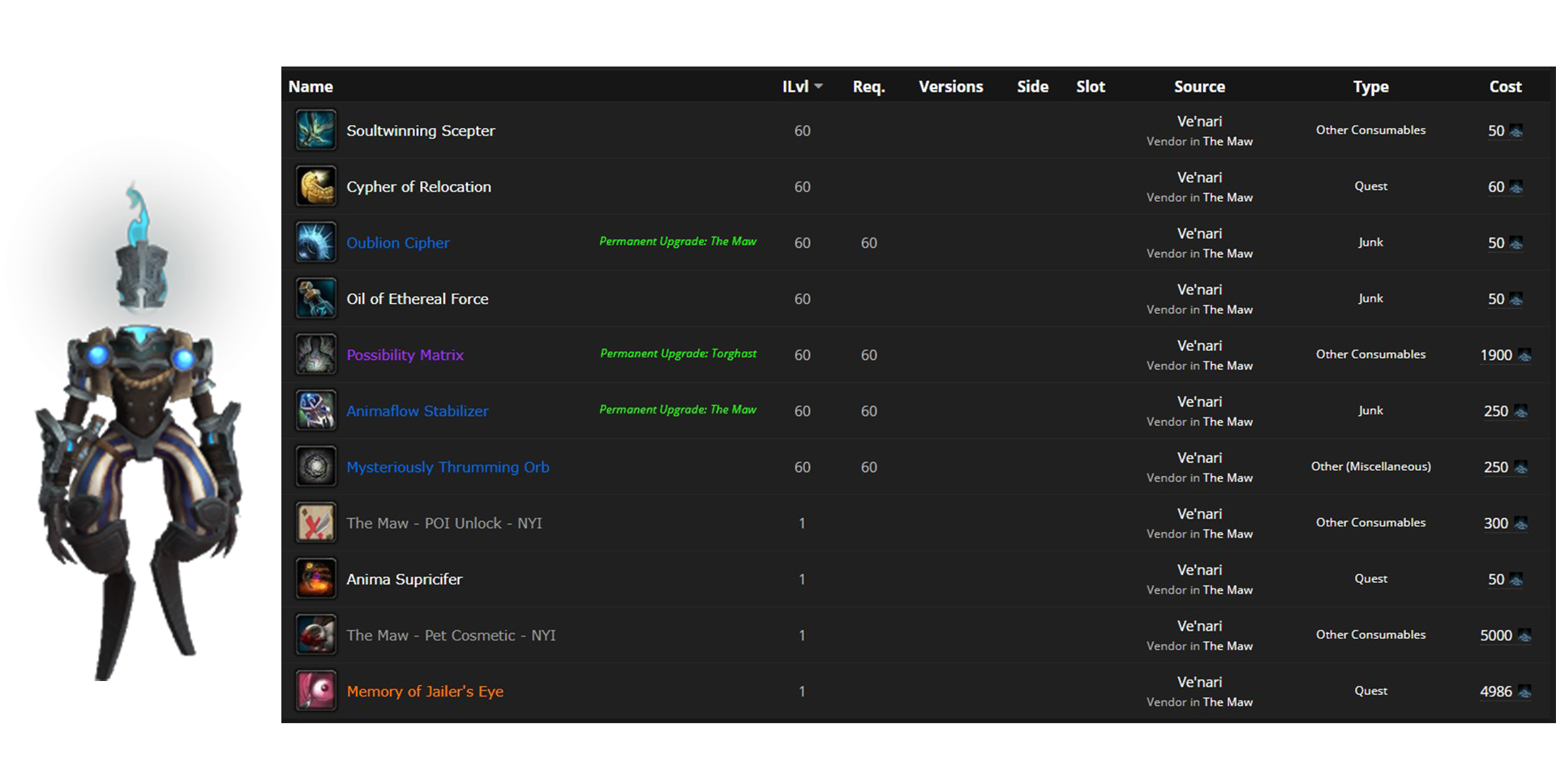 Ve'nari is a mysterious broker, who stuck in The Maw for eons, and knows more about the zone than anyone else in the Shadowlands. She can help players with providing to them information of The Maw, and offers items that will help survive the hellish landscape. You are able to increase your standing with Ve'nari by completing tasks within The Maw - Defeat rare enemies, complete events, or complete weekly quests with her to increase your standing with the Broker. Unlike other reputations, Ve'nari has her own bar reputation, and if you want to know your current standings with Ve'nari, you need to go back to Ve'nari's Refuge and talk to her.

Well, it seems that we will spend a lot of time there, so let's prepare better for all things, that might happen.